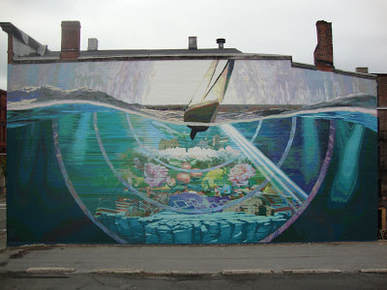 OVERVIEW
Completed in 2010, the Seneca 634 Mural was a $35,000 project established through the non-profit organization, Geneva Community Projects, in order to promote Geneva, New York.  Created by a Geneva native, Kenneth Millington, in his Brooklyn studio, the Seneca 634 Mural was designed in order to capture Geneva and its’ rich history. Even though the Mural is seen daily, by locals and tourists, due to its’ location on 93 Castle Street, the meaning and importance of the Mural may be missed as people walk or drive by, taking away from the project’s initial mission. For this reason, the Geneva Community Projects board of directors are looking for a well-qualified candidate, to further engage Genevans in the rich history portrayed by the mural, by creating a curriculum centered on history and the arts to engage local youth.  GCP would hope that the candidate could have their curriculum due to GCP board for review by January 2019 and upon receipt of a differentiated curriculum for elementary, middle and high school grade levels will receive a $500 stipend.
REQUIREMENTS QUALIFICATIONS
Candidate should be passionate about history and/or the fine arts, with an emphasis on advocacy work, and enjoy working with children.
Please submit your application with required materials by October 15th 2018 to kflowers@hws.edu

Know young people interested in learning more about the mural?
Click here for a robust activity guide for a variety of ages.
https://www.hws.edu/academics/service/pdf/complete_mural_curricula.pdf 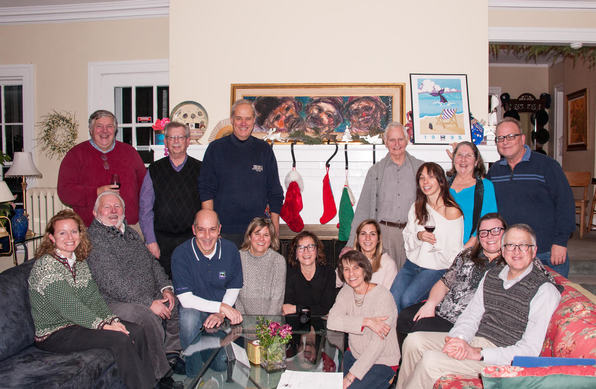 The Geneva Community Playground Project (GCP’s 1st project) began in the late summer of 1991 when a group of parents began meeting to discuss a creative playground in Geneva.  About one year later, on September 20, 1992 construction of the playground began at the site at the end of South Exchange Street. The playground was built in five days with help from over 1000 community volunteers. Approximately, $65,000 in donations was raised by individuals, groups and businesses in the Geneva area and thousands of dollars in materials were donated by local businesses. The playground's real cost had it been built entirely with purchased materials and paid laborers would have been approximately $200,000.
​
GCP's second project was the Seneca Lake Whale Watch (1993-2006). Planning for the Whale Watch began in the summer of 1993. Together with an existing Genevafest committee that spearheaded events downtown, the GCP board of directors expanded. The strengthened board worked hard to bring a first class festival to the Geneva lakefront. Again, the people, organizations, and businesses of the Geneva community responded with donations of money, materials and time. On August 27th 1993 the first Seneca Lake Whale Watch was held. Over 10,000 people attended the event which included over 75 arts and crafts vendors, two days of continuous entertainment on two stages throughout the festival grounds, wine tasting, American and ethnic food, interactive demonstrations, boat rides and fireworks. The reaction from the Geneva community was overwhelming as letters poured into the Finger Lakes Times congratulating the festival organizers. Profits from the Whale Watch were used to support the Boys & Girls Clubs movement in Geneva, the Christmas lighting project of the Downtown Business Improvement District and improvements to the Geneva lakefront.
Since the Whale Watch ended in 2006, GCP has remained active in the community. Recent projects include
Kathy Gaylord Costa Citizenship Award
The board of directors of GCP Inc. established  an award to be given annually to a person whom the board feels should be recognized for outstanding service to the Geneva community. The award is called the Kathy Gaylord Costa Citizenship Award, named in honor of one of the original memebrs of the board of diretors of GCP Inc.
Kathy Costa enthusiastically joined the Geneva Community Playground Project at its early planning stages in 1991, and when GCP Inc. was formed in 1992, with modest three person board of directors, she was chosen as one of the original three directors. Kathy was a devoted mother of two who, held a job and was active in her children’s school association. Her involvement in the playground project was instrumental to its success. Kathy unexpectedly passed away in 1994 but lives on as an inspiration to those whose lives she touched. The recipients of the Kathy Gaylord Costa Citizenship Award should know it is an honor to be associated with the name of this wonderful person.
In 2017 the GCP board choose Fred Brockway for the recipient of this award. Brockway’s can-do attitude and uplifting spirit made him the perfect choice. Since retirement as a guidance counselor in 2003, Brockway has been involved in or leading many local projects. In the fall of 2015 Brockway approached the GCP board in search of a sponsor for the City Central neighborhood association’s butterfly garden project on E. Castle between 5&20 and the railroad tracks. Fred has worked tirelessly to build and maintain the beautiful garden that now welcomes Geneva residents and guests to the downtown area.

On a fall morning in 2012, more than 250 members of the Geneva and Hobart and William Smith communities gathered at the shore of Seneca Lake to assemble what would be, by the end of that day, the Geneva Community Lakefront Playground. Now, five years later, the collaborative spirit that led to the playground’s construction continues to drive Geneva’s growth, says Katie Flowers, director of the HWS Center for Community Engagement and Service Learning.
“The upward trajectory we see in Geneva is due to the collective and ongoing investments by stakeholders across the community,” says Flowers, who also serves as secretary on the board of Geneva Community Projects, Inc., which partnered with the Colleges and the city to develop the playground. “In addition to the work on the playground, HWS and GCP share a longstanding alignment on critical educational and cultural initiatives throughout the community, from supporting Geneva Reads to the Geneva music festival. This exemplifies the wide-spread investment, creativity and community pride we see throughout the city.”
GCP board member Katharine Korona says that the “synergy created from working collaboratively” on projects like these “results in greater accomplishments” for the entire city. “A collaborative effort increases participation that leads to increased community awareness and the sharing of resources and expertise that can make challenging tasks more manageable,” she explains.
A charitable corporation, GCP is dedicated to building and renewing the strengths of the Geneva community through projects designed to promote the public good and uplift the human spirit. The collaboration between GCP, HWS and the city led to Geneva’s recognition as a “2012 Playful City USA” by KaBOOM!, the national organization that has built thousands of playgrounds throughout the U.S. since 1995. Lauding Geneva’s commitment to pursuing “goals on a community-wide level,” KaBOOM! and the Dr. Pepper Snapple Group awarded a $20,000 “Let’s Play” grant to help fund the lakefront playground’s construction.
Most recently, GCP has supported Chair-ish Geneva, a collaborative project with the City of Geneva and Sensenig’s Landscape Supply, selling memorial Adirondack chairs that have been installed along the city’s newly renovated Lakeside Park. That project, which Mia Morrison ’20 helped develop and name, includes a 10-year sponsorship of the chair, with proceeds going to fund other community enhancing projects.
“I was happy to brainstorm ideas for the fundraiser with Geneva Community Projects board members,” says Morrison. “The idea of ‘Chair-ish Geneva’ came to me while thinking about ways we can commemorate loved ones, enjoy the beautiful lakefront and raise funds for initiatives in my hometown of Geneva.”
Over the past several years, Geneva has garnered significant recognition for its community development efforts. In 2015, Geneva was just one of 10 communities across the country to be named an All-America City by the National Civic League, which acknowledged the city’s progress in its neighborhood initiatives for community development and neighborhood revitalization; Geneva 2020; and the downtown revitalization efforts.
In the summer of 2017, the city received a $10 million economic investment for downtown revitalization from the State of New York, as well as an additional $5 million for the creation of the Finger Lakes Welcome Center. These investments, said New York Governor Andrew Cuomo, would help “attract jobs, private investment and transform the downtown into a vibrant economic engine for the entire region. These strategic and diverse projects will help grow the job market, develop the business district, and build on our momentum to keep the Finger Lakes moving forward.”
​
A time-lapse of the playground’s construction can be watched here.

For the past three years Food Justice of Geneva has been trying to address the food desert issue. During the harvest season they receive food from Willard Start. Last year they gleaned 15,000 pounds of fresh vegetables and fruits. In the Spring of 2017 the City of Geneva donated $5,000 to Food Justice for the purchase of a food trailer. Food Justice co-chairs, Henry Farro and Teresa Shaffer have worked hard to transform the trailer into a walk-in cooler using a "cool-bot." The new refrigerated trailer will allow Food Justice to quadruple the amount of fresh food gleaned each year because they will have a place to store the food. The City of Geneva has a new 5,000 square foot community kitchen. Food Justice will teach canning lessons to food recipients so the fresh food lasts longer. The Rose Soiree donated $1,250 so fifty canning kits can be created for the upcoming season.